you will see places inaccessible to ordinary tourists

We take comfortable minibuses such as a Mercedes Sprinter from/to airport as well as for our tours. All vehicles have AC, Wi-Fi and radio.  Safety is guarantee by professional and experienced drivers.

Participants gather at the airport. Check-in. Flight to Georgia.
DAY 2. TBILISI (distance: 20km)
Arrival in Tbilisi where we’ll be welcomed by Tamada Tour guide, transfer from the airport to hotel. Rest. Breakfast. Sightseeing the beautiful capital city of Georgia: Tsminda Sameba (20th cent.), fortress of Narikala (6th — 8th cent.), tserkov Anchiskhati Basilica of St. Mary (5th — 6th cent.), tserkov Metekhi (13th cent.), Tbilisi Sioni Cathedral (11th -12th cent.), and the Tbilisi sulfur baths including the world famous Orbeliani Baths (19th cent.). Taking a gondola lift to see the monument of the Mother of a Georgian (20th cent.). Sightseeing the Tbilisi old town and monuments on Rustaveli Avenue: The Freedom Monument, the house of the former Parliament, theater, opera erected in oriental style, philharmonic hall, the Kashveti tserkov (19th cent.), and old-time Palace of Caucasus Viceroy. Free time and dinner restaurant with live music and dancing. Accommodation in hotel.
DAY 3. TBILISI – ANANURI – GUDAURI – STEPANTSMINDA — TBILISI (distance: 306 km)
Breakfast. We go through the Georgian Military Road to Stepantsminda (Kazbegi) to see an inactive volcano Mount Kazbek (5,033 m over the sea level). On the way to our destination we’ll admire a magnificent fortress of Ananuri (16th – 17th cent.) which is located on the large water reservoir Zhinvali and by off-road cars we’ll to go to the world famous Gergeti Trinity Church (2,170 m above the sea level), from which the snow-capped peak of the Kazbek can be spotted. Return to Tbilisi. Dinner on the go. Accommodation in hotel.
DAY 4. TBILISI-MTSKHETA-GORI- UPLISTSICHE-KUTAISI (distance: 230 km)
Breakfast. We head to Mtskheta — the former capital of the Kingdom of Iberia, where we can admire monuments enlisted in the UNESCO Intangible Cultural Heritage List. We go up to the Jvari tserkov (6th -7th cent.) with
a breathtaking view on the city and two main rivers Mtkvari and Aragvi. The next place is the Svetitskhoveli Cathedral (11th cent.) famous for religious artifacts and impressive frescoes. Free time. Another destination is nunnery Samtavro (4th cent.) in which Georgian rulers who converted to Christianity in 337 on behalf of the whole country are buried. The plan is to visit a rocky city of Uplistsikhe (5th cent.) a former home for rulers and a center of pre-Christian cult. We’ll go to Gori a city famous for being a birthplace of Joseph Stalin. We go further through the Surami Pass in order to get to one of the oldest urban complexes in the world – Kutaisi (17th -15th cent. B.C.) to recognizable for legends about Jason and Prometheus. Dinner. Free time. Volunteers can take a walk to the city center to see theater and opera house and a fountain with reproduced sculptures which were found in Georgia 5,000 years ago. Accommodation in hotel.
DAY 5. KUTAISI-GELATI-BORJOMI- AKHALTSIKHE (distance: 176 km)
Breakfast. We go to Kutaisi attractions: a present-day headquarters of the Georgian Parliament (since 2012) and the Bagrati Cathedral (6th cent., reconstructed in the 20th cent.) overlooking city and mountains, the Gelati Monastery (12th – 13th cent.) with its three tserkovs and Gelati Academy in which studied prolific Georgian and Greek philosophers. Moreover, the king David IV of Georgia (known as David the Builder) was also buried in that place. The last attraction is the Cave of Prometheus and Borjomi Park (19th cent.). We’ll go to Akhaltsikhe. Dinner. Accommodation.
DAY 6. AKHALTSIKHE -VARDZIA-TBILISI (distance: 329 km)
Breakfast. The first destination is the medieval architectural phenomenon: the excavated in mountains town of Vardzia (12th – 13th cent.) and a great Khertvisi fortress (2nd – 12th cent.) which was said to be destroyed by Alexander the Great. A small coffee break and return to Tbilisi. Dinner. Accommodation.

Breakfast. We’ll go to Kakheti — the oldest region in Georgia and the cradle of wine. Attractions include: Sighnaghi (18th cent.) — known as Georgian Carcassonne, nunnery Bodbe Monastery (9th – 17th cent.) connected to Saint Nino who introduced Christianity in Georgia, and an impressive exhibit of the most renowned Georgian primitivist painter Niko Pirosmani and a collection of sculptures which date back even to 5,000 years ago. Wine tasting in a traditional winery. Return to Tbilisi. Dinner. Accommodation.
DAY 8. ARMENIA: DILIJAN-SEVAN-YEREVAN (distance: 291 km)
Breakfast. We go to Armenia through a border crossing in Sadakhlo. Attractions include: monastery complex of Haghartsin (10th cent.), the town of Dilijan known as an Armenian Switzerland, Lake Sevan to take a walk on the peninsula and the Sevanavank Monastery (9th cent.). Volunteers may take a bath. Dinner. Yerevan. Accommodation in hotel.
DAY 9. YEREVAN CITY TOUR-KHOR WIRAP (distance: 85 km)
Breakfast.  Yerevan city tour and exploring the capital city: Republic Square, Achtanak Park, observation tower overlooking a charming city skyline, Cascade, Mashtots Avenue, sports and concert complex Sportvino, the Palace of the President, Parliament and Theater Square. Free time. Then we go to the Sergei Paradjanov Museum (Paradjanov was the great and eminent Armenian director). The next attraction is Khor Wirap monastery (7th cent.), which is a destination for numerous pilgrimages. The monastery overlooks a breathtaking view on the Mount Ararat (5,165 m above the sea level). Dinner. Accommodation.
DAY 10. YEREVAN-VAGHARSHAPAT-ZVARTNOTS-YEREVAN (distance: 54 km)
Breakfast. The first destination is the town of Vagarshapat (the Armenian Vatican) which captives with sacred and secular architectural monuments such as: Catholicos (residence of the head bishops of the Armenian Apostolic Church), Saint Hripsime Church as well as Etchmiadzin Cathedral (303 A.D.) and Zvartnots Cathedral (7th cent.) enlisted on the Intangible Cultural Heritage List of UNESCO. The last attraction is the world-famous Yerevan Brandy Company which produces Ararat brandy. We will learn about the process of production and know the taste and smell of this golden liquor.
Day 11. YEREVAN-GARNI-GEGHARD-YEREVAN (distance: 80 km)
Breakfast. Attractions include: Matenadaran Museum where the manuscripts (5th – 15th cent.) in various languages are kept. go to the fortress of Garni (1st cent. B.C.), the Temple of Garni dedicated to the sun god Mihr and excavated in rocks monastery of Geghard with relicts of Saint Andrew and John the Evangelist and the Holy Lance. Dinner and folkloric evening attractions. Accommodation in Yerevan.
DAY 12. DEPARTURE
Preparation for return. Dry provisions for breakfast. transfer to airport. Departure.

Booking is available The following personal data must be provided in order to book a trip, conclude tour participation agreement and buy insurance and flight tickets: The following files will be enclosed and sent to your e-mail: Payment for tour shall be made in accordance with the payment schedule. 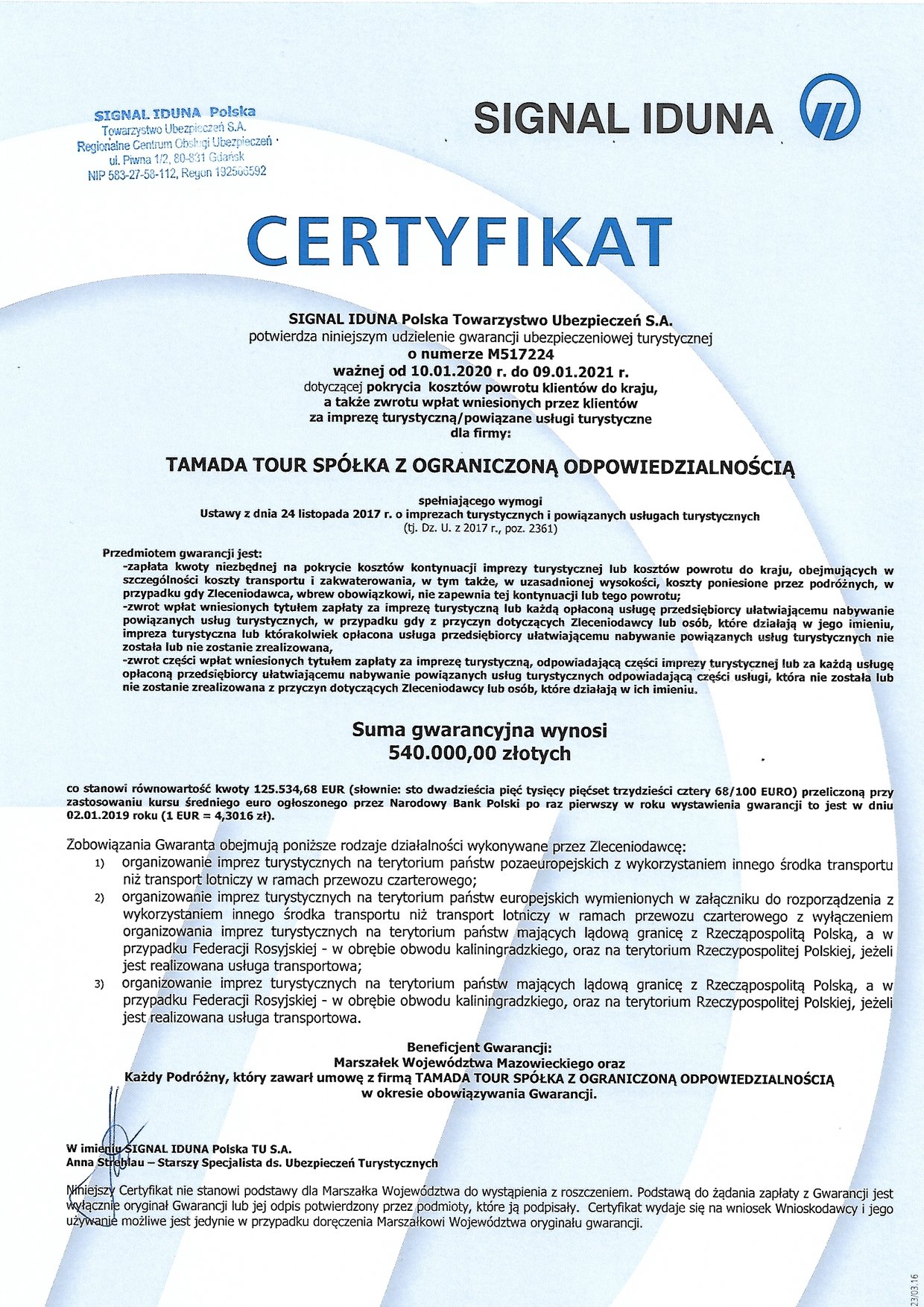